This easy enchiladas recipe is always a hit! Featuring a flavorful homemade sauce and lots of melty cheese, it’s simple, comforting, and delicious.

This enchiladas recipe is the kind of simple, comforting dish that we all need in our weeknight rotations. It’s easy, it’s flavorful, and it will win over the pickiest palates (our kiddo always asks for more!).

The filling is a combo of gooey cheese, black beans, and steamed spinach. I roll it up in corn tortillas, which I then smother with homemade enchilada sauce and more cheese. Finally, I bake the enchiladas until the cheese is melty and the edges of the tortillas are crisp. For such a simple recipe, the taste, texture, and overall deliciousness are out of this world! I think you’re going to love it. 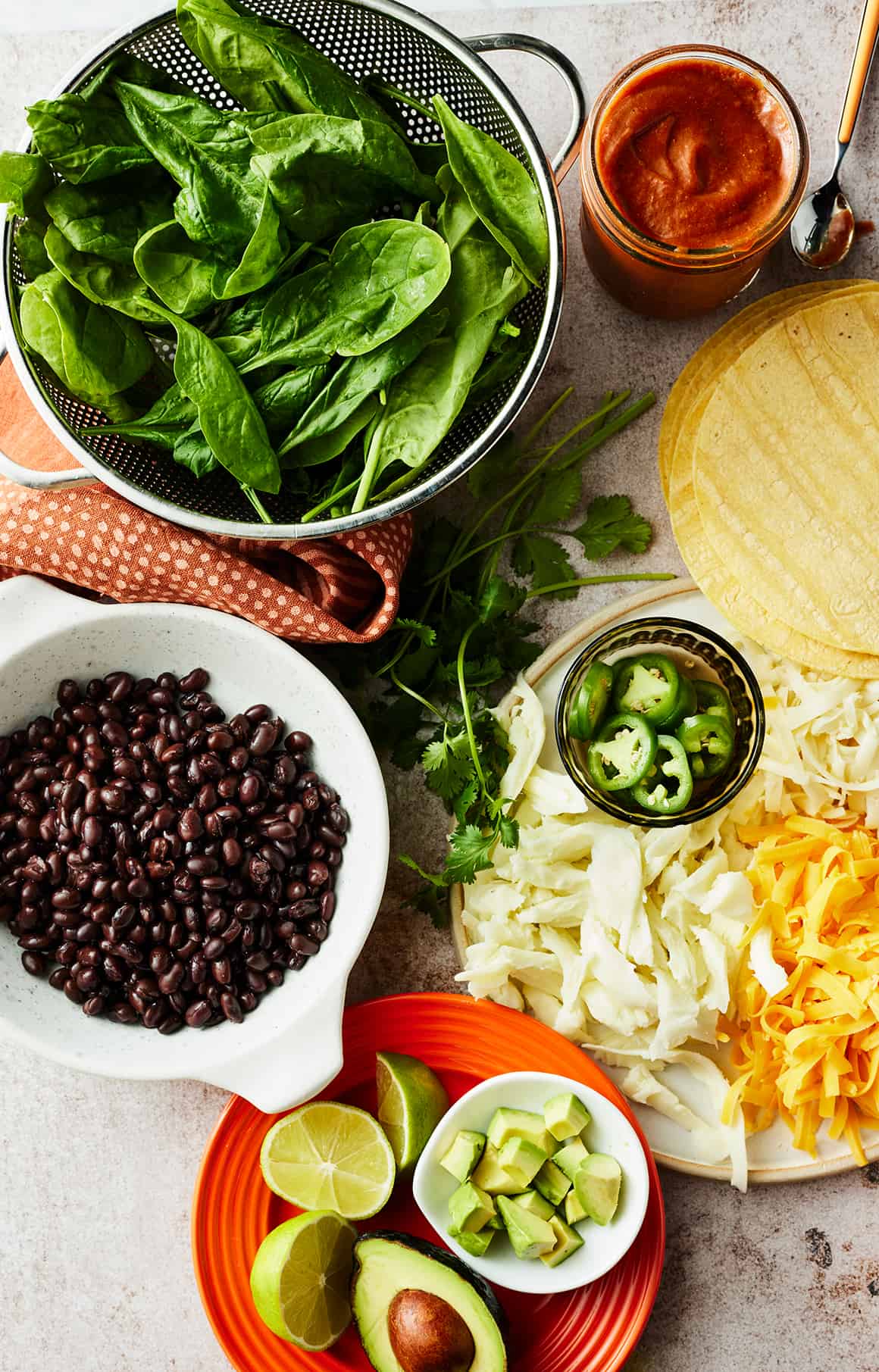 Though enchiladas are now a fixture in American home kitchens and Tex Mex cuisine, they have their roots in Mexico. Styles of enchiladas vary greatly from region to region and from kitchen to kitchen, but generally, they consist of tortillas dipped in a sauce and then rolled around a filling. They are also sometimes left unfilled, folded over, and topped with meat, cheese, or vegetables. This cheese enchiladas recipe is a version of the enchiladas I grew up eating in the Midwest, and it’s similar to some Tex Mex enchiladas I’ve enjoyed at restaurants in Austin too. Here’s what’s in it:

Serve with a squeeze of lime! 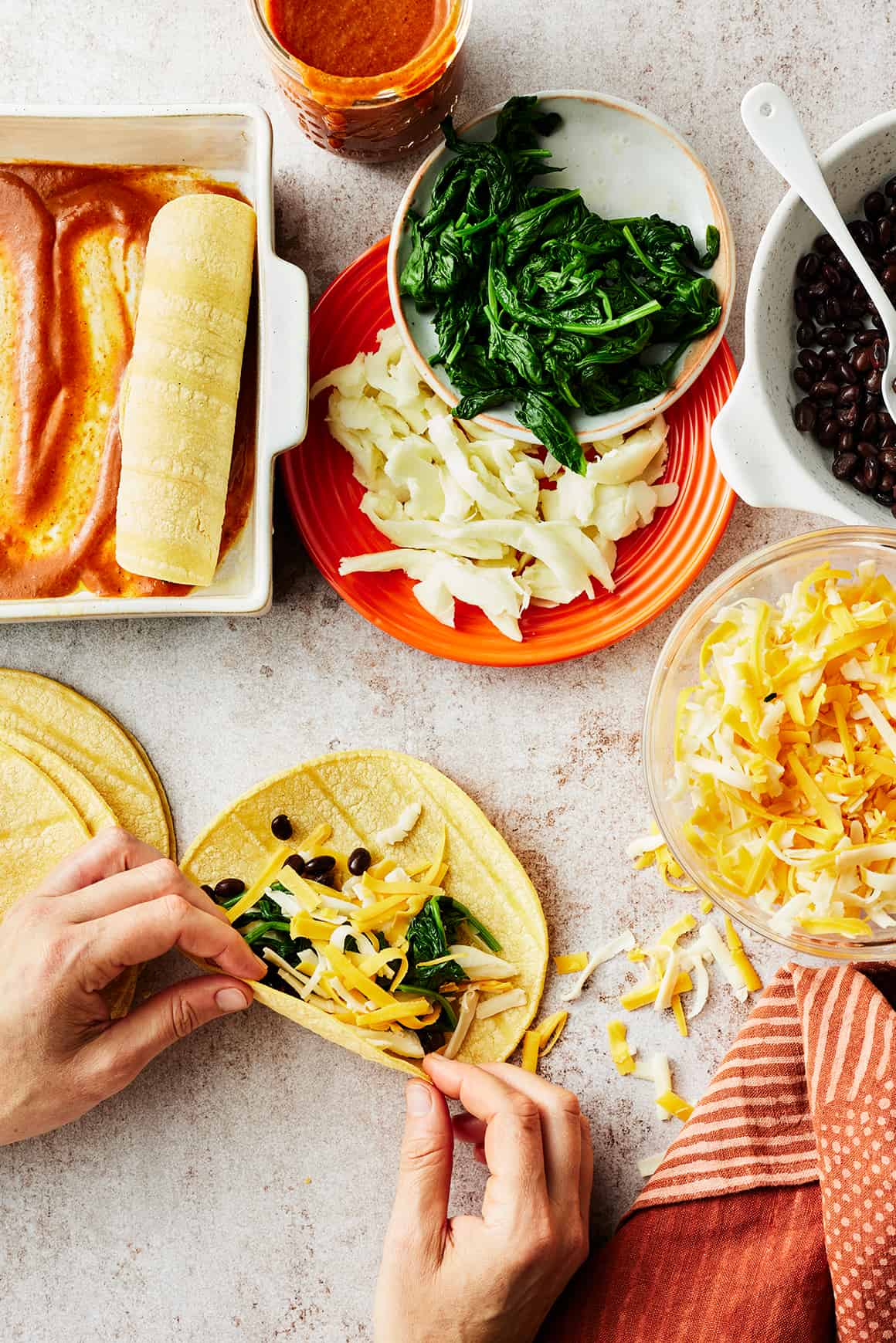 How to Make Enchiladas

This cheese enchiladas recipe is so simple! Here’s how it goes:

First, prep the sauce and fillings. The sauce is quick and easy to make on the stove (we’re talking 15 minutes!). It also keeps well for up to 5 days in the fridge if you want to make it in advance. Once the sauce is set to go, you’ll need to steam and chop the spinach and grate the cheddar and Jack cheeses. Tear the Oaxaca cheese into strips.

Next, fill the enchiladas. Spread 1/2 cup of the sauce at the bottom of a large baking dish. Place a little of each cheese and some of the black beans and spinach in a tortilla, and roll to seal. Place it, seam side down, in the prepared baking dish. Repeat to assemble the remaining enchiladas.

Then, add more sauce and cheese. Pour the remaining sauce down the center of the enchiladas, leaving the edges of the tortillas bare so that they crisp up in the oven. Scatter the remaining cheddar and Jack cheeses in the center as well. 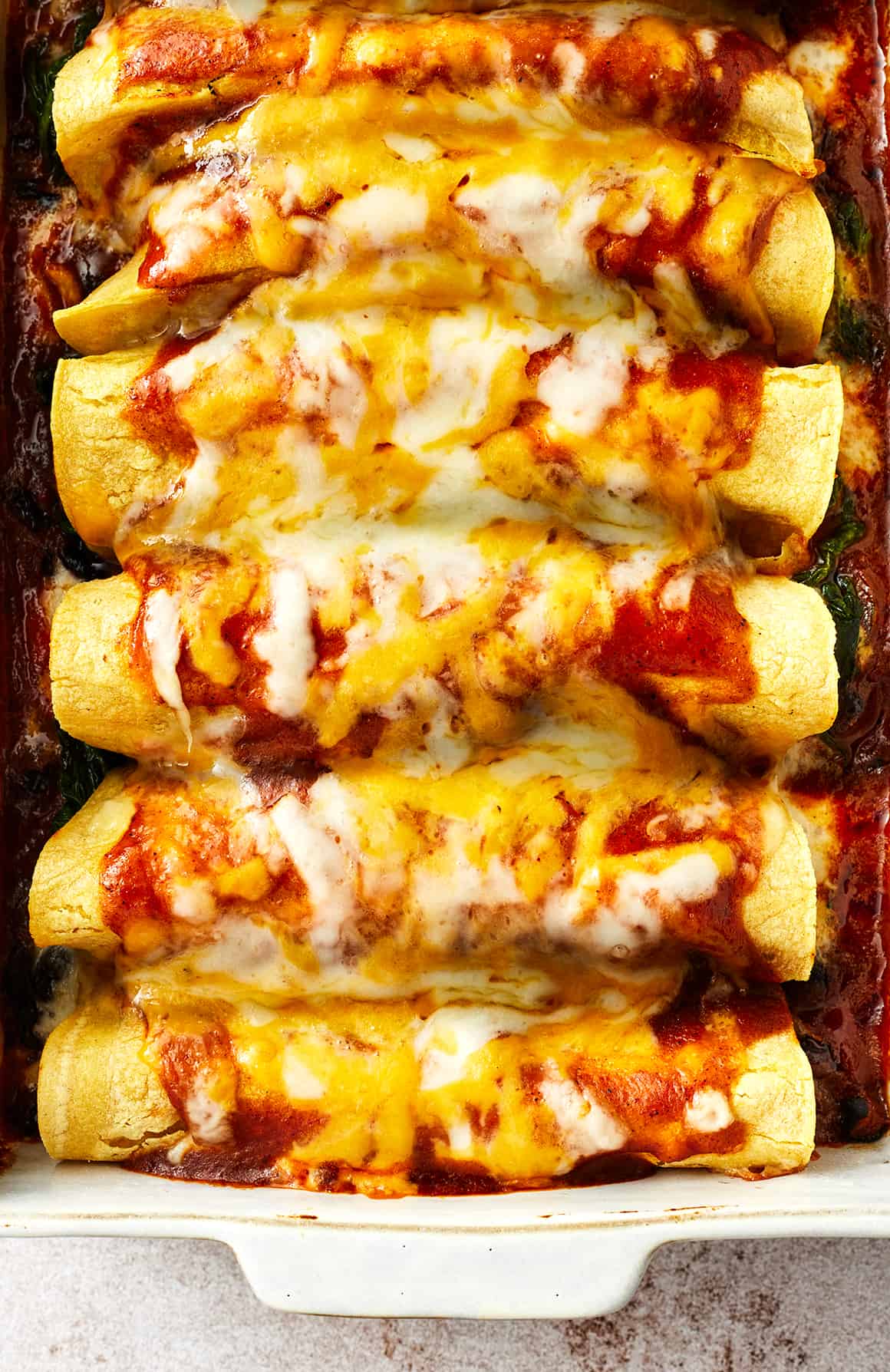 Finally, bake in a 350°F oven until the cheese is melted and the edges of the tortillas are crisp.

Let the enchiladas cool slightly, then load them up with fresh cilantro, diced avocado, and sliced jalapeños, and dig in!

Oh, and if you want to get creative with your toppings, don’t hold back. Sliced radishes, diced white onion, shredded cabbage or lettuce, or a dollop of sour cream would be great here too. 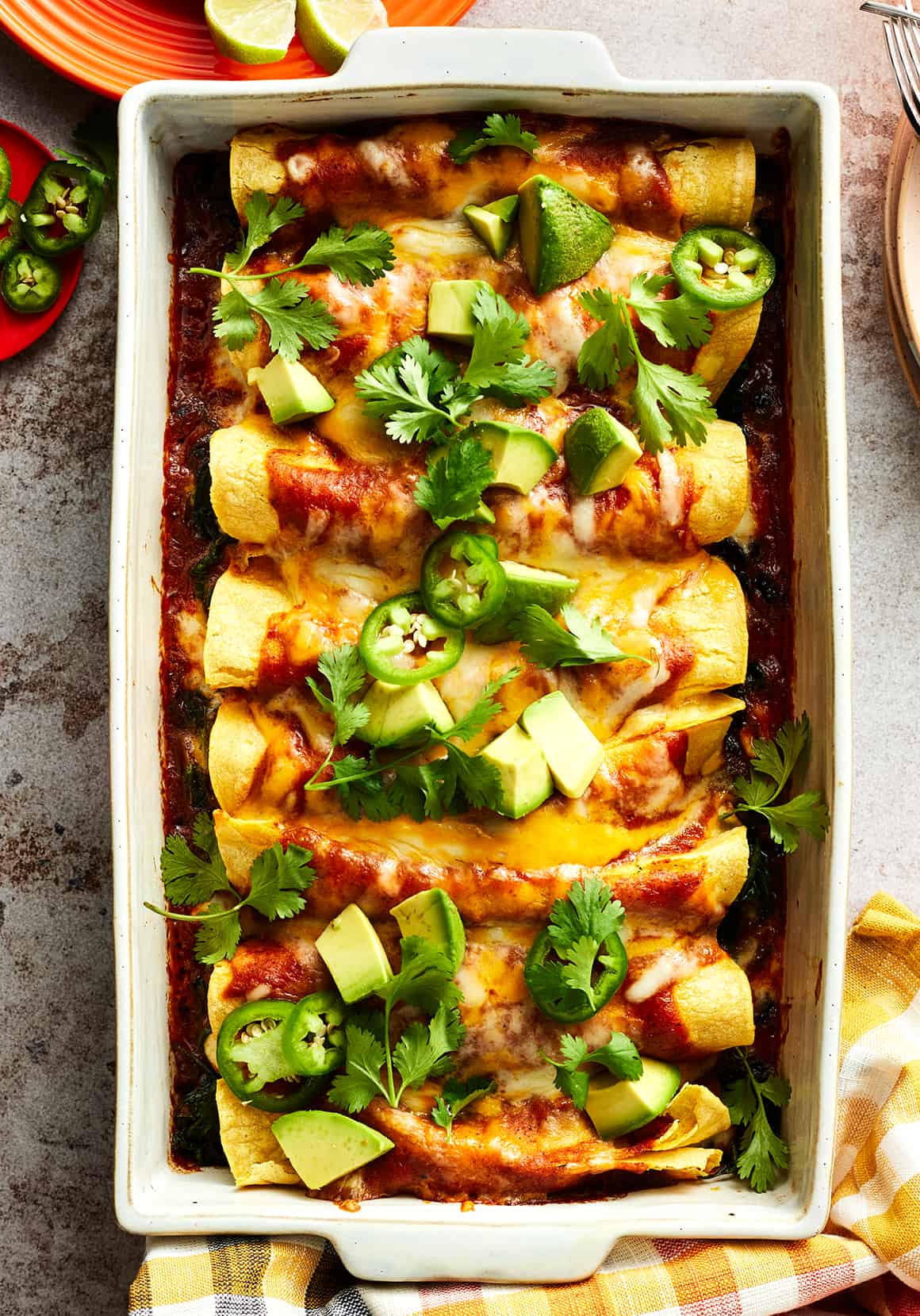 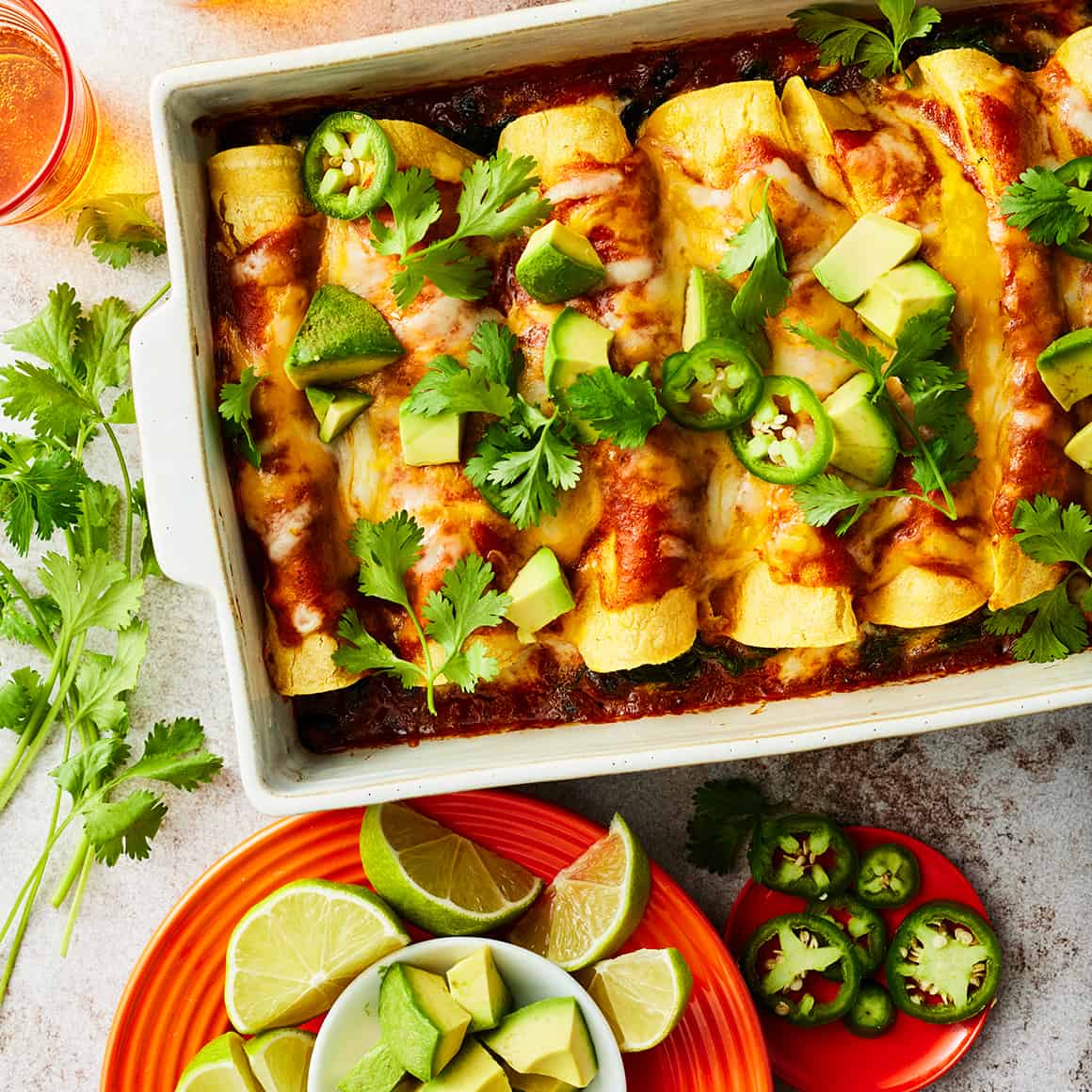 If you love this enchiladas recipe, try one of these easy weeknight dinners next: 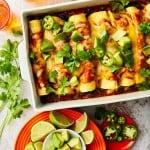 This cheese enchiladas recipe is a delicious meal that’s easy to make on any night of the week. To get ahead, prepare the sauce in advance. It will keep for up to 5 days in the fridge.

*Place the spinach in a steamer basket and set over a pot filled with 1 inch of water. Bring the water to a simmer, cover, and steam for 1 minute, or until the spinach is wilted. Transfer to a strainer and squeeze out the excess water. If desired, roughly chop the spinach.