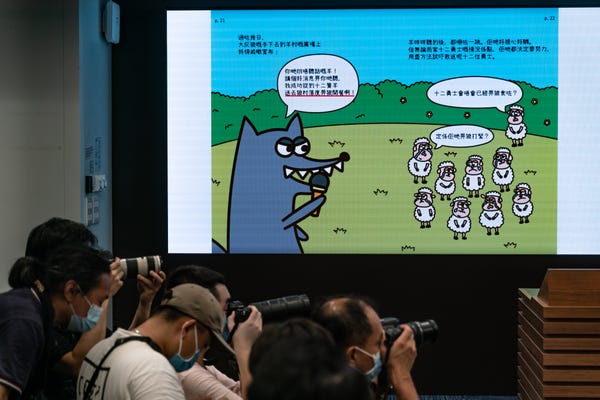 The therapists may face up to two years in prison under a colonial-era British law against seditious offenses, which the city’s authorities have recently revived to use in tandem with a sweeping new national security law.

Prosecutors said the evil wolves in the books were an allusion to the mainland Chinese authorities while the kind sheep represented Hong Kong residents, according to a judgment published by the courts.

The five defended themselves by saying the books are fables meant to teach universally-celebrated virtues and are open to interpretation, per the court judgment.

However, District Judge Wai Kin Kwok ruled that the books were seditious “not merely from the words, but from the words with the proscribed effects intended to result in the mind of children.”

In one of the books, a “Wolf-Chairman” directed another wolf to masquerade as a sheep in an attempt to occupy the sheep village and eat those inside, Kwok wrote in a summary, per court records.

Kwok described the disguised wolf as an analogy for the Beijing-backed Chief Executive of Hong Kong, which he wrote would lead children to view the city’s real-life leader with contempt.

Another book, titled “12 Warriors of Sheep Village,” appears to reference the 12 Hong Kong protestors who were caught trying to flee to Taiwan by sea in 2020. The book tells the story of 12 sheep who fled their village in a boat but were later captured and brought to be imprisoned in a wolf-run fortress.

Kwok wrote that children who read the book would be “led to believe that the 12 fugitives are victims of oppression and unfair prosecution.”

The third book involved a story that Kwok said would lead children to believe Beijing had allowed people coming from mainland China to “make their home dirty and spread the pandemic.”

The five defendants — Lai Man-Ling, Melody Yeung, Sidney Ng, Samuel Chan, and Fong Tsz-Ho — have been detained since July last year and were denied bail. All five are below the age of 30 and are due to be sentenced on Saturday.

Human Rights Watch on Wednesday called for the sedition convictions to be reversed.

“Hong Kong people used to read about the absurd prosecution of people in mainland China for writing political allegories, but this is now happening in Hong Kong,” said Maya Wang, a senior Chinese researcher for the non-profit group.

“Hong Kong authorities should reverse this dramatic decline in freedoms and quash the convictions of the five children’s book authors,” she added.

“Concerned governments should speak out against Hong Kong’s abuse of the sedition law,” Human Rights Watch wrote in a release, urging the governments of Australia, the European Union, and the UK to join the US in imposing sanctions on Hong Kong officials stamping out dissent.