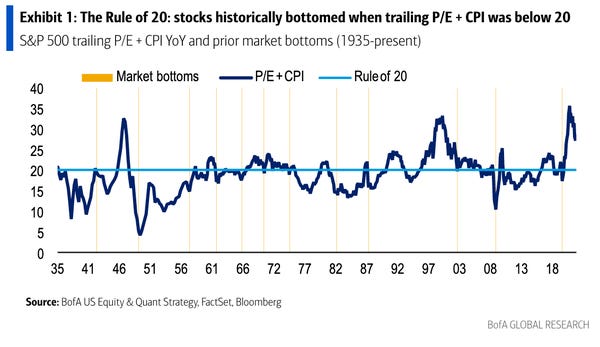 Indicator With Perfect Record Says No Bottom yet

It’s too early to call a market bottom yet, and technical indicators are signaling stocks have more room to fall – including one sign post that has a perfect track record, according to Bank of America.

Analysts highlighted in a Wednesday note to clients that the so-called Rule of 20 dictates that the sum of year-over-year CPI growth and trailing P/E has always been below 20 when the market bottomed. But right now, it’s sitting at 28.5, with P/E at 20 and the latest CPI showing an 8.5% gain.

Other indicators also suggest the bottom isn’t in yet.

“Only 30% of our bull market signposts (things that happen before a market bottom) have been triggered vs. 80%+ in prior market bottoms, suggesting that another pullback is likely,” BofA analysts wrote.

Those additional indicators that have usually occurred before a market bottom include Fed rate cuts, rising unemployment, the Sell Side Indicator flashing a buy signal, and a steepening yield curve, among others.

But the Rule of 20, in particular, is the only data point from BofA’s list that has flashed at every market bottom since September 1974.

“Outside of inflation falling to 0%, or the S&P 500 falling to 2500, an earnings surprise of 50% would be required to satisfy the Rule of 20, while consensus is forecasting an aggressive and we think unachievable 8% growth rate in 2023 already,” analysts wrote.

Separately, the combination of lower rates and equity risk premium since June suggest that markets are raising expectations for a soft landing, according to the note.

Yet the bank’s analysts warned that a Fed-induced hard landing – when rising rates tip the economy into a recession – shouldn’t be counted out prematurely.